During the 1970s and once more in the 80s, CJIC TV Producer Director Jerry MacDermid arranged what we called, ‘combat missions’ to Europe, Cyprus and Egypt.

At the time, the Department of National Defence (DND) accepted expressions of interest from media in travelling to those destinations to do stories on Canada’s role in NATO and in peace keeping.

DND would transport media on its scheduled troop transports out of Ottawa, accommodate media in Officers’ Quarters and provide meals in the Officers’ Mess. While media outlets involved enjoyed having the content, they could also do without it and didn’t want to pay staff to be away for a couple of weeks on these tours. And so, staff took their vacation time to go, the broadcast media provided equipment and all media provided space for the stories.

DND got positive exposure, the media got great content, often including interviews with regular and militia personnel serving overseas and, media crews got a front row seat seeing different countries and being on the inside of military missions.

Here are a few glimpses of a 1970s ‘combat mission’ to Germany and then on the Cyprus (for a 24-hour visit, transported with some troops and mail onboard a Hercules aircraft from Lahr, Germany to Nicosia, Cyprus.)

Operation SNOWGOOSE is Canada’s involvement in the United Nations Peacekeeping Force in Cyprus (UNFICYP). It is one of Canada’s longest-running missions in another country. It dates from the beginning of UNFICYP in 1964.

Canada maintained a battalion-sized group of peace-support troops in UNFICYP from March 15, 1964 to June 15, 1993.  Fifty-nine groups totaling about 25 000 CAF members completed six-month tours on the island.

Canada’s troops were committed by Prime Minister Lester B. Pearson’s government on March 12, 1964. The first Canadian troops arrived in Cyprus on March 15, 1964. They were followed by:

Canada withdrew its combat arms group from UNFICYP in 1993. By this time, every Regular Force infantry battalion had gone to Cyprus at least once.  Regular Force artillery and armoured regiments had also trained for infantry duties so that they could take part.

The operation name “Snowgoose” dates from July 1974. This was when the Canadian group in UNFICYP was quickly made stronger.  This took place when the Turks invaded Cyprus on July 20, 1974.  Source http://www.forces.gc.ca/en/operations-abroad-current/op-snowgoose.page

Children in Egypt are interested in Canadian television crew.. 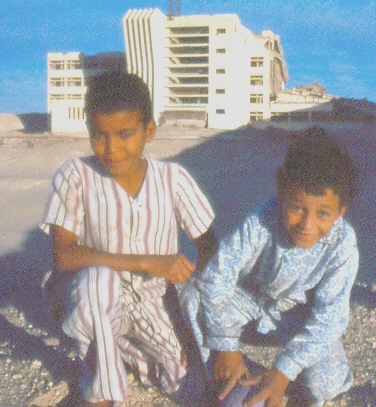 Art Osborne, escorted by United Nations representatives, on a camel ride by the pyramids near Cario, Egypt. 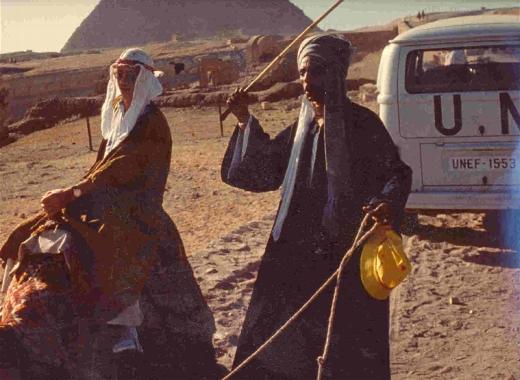