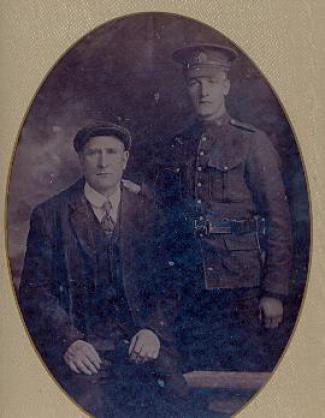 Arthur Wilbert Hurley (uniform, standing) with his father, Charles Hurley. Below, with his army unit - he's back row, right end. 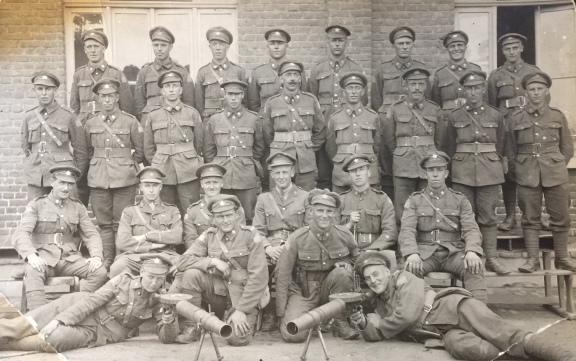 Below photo, A W Hurley, front row, third from left. 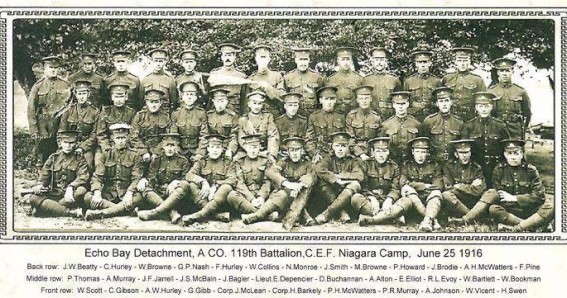 In October 1917, my grandpa Art was a hero at the Battle of Passchendale, as detailed in his military highlights list following these descriptions of what it was like on the battlefield:

Veterans Canada describes it this way: "Advancing through the mud and enemy fire was slow and there were heavy losses but our soldiers clawed their way forward. On an exposed battlefield like that one, success was often only made possible due to acts of great individual heroism to get past spots of particularly stiff enemy resistance. Despite the adversity, the Canadians reached the outskirts of Passchendaele by the end of a second attack on October 30 during a driving rainstorm." More detail here:

These entries from Appendix Number 1 to The War Diary of September 1917:

1Led a section of bombers in the attack on German position near Lens, night of September 3,4, 1917 attacking and capturing an enemy strong point.
Latter carried an important message under heavy fire and successfully delivered it.
The evening after the raid. Private Hurley volunteered to accompany an officer to recover the body of his company Commander, which owing to casualties, had not been brought in, and with the officer after two unsuccessful attempts under heavy fire, found and brought in the body.
--

2Map Ref Belgium 28 N.E., D. 10. South of Passchendaele. Showed great coolness and gallantry throughout the operations against Bellevue Spur October 26, 1917. Observing an enemy patrol on No Man’s land he located their position, went forward with a small party, opened fire on them inflicting casualties and captured the remainder of the party.
--

(parts of this entry is blurred/unable to be read; the volunteer referred to would be Art Hurley)

All casualties had to be brought back under heavy fire and the [can’t read] evacuation of all wounded speaks for itself. The [can’t read] and stretcher bearers was beyond praise and specific instances are inopportune when all did so well. One case in connection with the bringing back of the dead and wounded will however illustrate the spirit that prevailed throughout. It was found that after the operation was complete, that, owing to the party detailed for the purpose, having received additional casualties, one body, that of Capt. Fryor [possibly Fryer, or F could be G] the gallant commander of “A” Company, had not been brought back but was left just outside CIBABAR [letters may not be these] trench. Lieut.. Graham [possibly Orenham; or, other variations] took one of the many volunteers and at dusk the evening after the attack, proceeded to the enemy wire to complete the M.G. and rifle fire prevailing and found and brought back the body.
--
Subsequent research shows that this is likely the individual whose body was brought back (referenced as Capt. above and Major below; date of death and Unit correspond to event above):

(Legion Magazine, May/June 2005) - The battle for the Belgian crossroads village of Passchendaele was one of the bloodiest battles of all time. In just 12 days—from Oct. 26 to Nov. 6, 1917—the Canadian Corps suffered nearly 16,000 casualties, and all for a gain of 4 1/2 miles.

And so at dawn on Oct. 26, 20,000 men began inching their way across no man’s land in rain and mist, shell hole by muddy shell hole toward their objective.

Adding to the soldiers’ difficulties was the fact that German planes had managed to bomb and strafe the supply areas, reducing the capability of the artillery. But before the bloody battle was over on Nov. 6, nine Canadian Victoria Crosses had been earned, four of them on the same day, two of them posthumously.

Lieut. Robert Shankland had already been awarded the Distinguished Conduct Medal at Sanctuary Wood in 1916. Now, as an officer with the 43rd Bn., he distinguished himself even further, enough to be awarded the VC. On the morning of Oct. 26, he led his platoon of 40 men from Company D to the crest of the hill at the Bellevue Spur, the main trench line defending Passchendaele.

Overrunning it and holding the position was critical to capturing the town.
On the right, the 58th Bn., which was under heavy fire from Snipe Hill, was forced to retire after failing to reach its objective. Some of the men joined Shankland’s platoon, but this still left his right flank open. For four hours they withstood incessant artillery shelling and German counterattacks, sustaining frightful casualties. But by this time, the 8th Brigade on the left was forced to withdraw. This left both of Shankland’s flanks exposed.

He and his men were in danger of being cut off and losing the vital position gained at such fearful cost. The only solution was to bring up reinforcements and counterattack. Shankland turned over his command to another officer and then weaved his way through heavy mud and German shelling to battalion headquarters where he gave a first-hand report of the situation. He also offered a detailed plan on how a counterattack with reinforcements could best be achieved. He then returned to his men to lead the forthcoming attack supported by reinforcements from the 52nd and 58th battalions.

A Co. of the 52nd, under the command of another Winnipegger, Christopher O’Kelly, was ordered to go to Shankland’s aid. O’Kelly’s troops worked their way to the crest of the Bellevue Spur, where Shankland’s men were distracting the Germans with their fire. While sweeping the top of the hill in the face of enemy fire from pillboxes, O’Kelly’s men completely routed a German column they caught advancing towards Shankland’s position.

O’Kelly then led his men against six pillboxes that were holding up the battalion’s advance. Under his aggressive leadership they overcame the concrete emplacements and captured 100 Germans. Later that afternoon, O’Kelly and his men had to entrench themselves to ward off a German counterattack. But the day wasn’t over. That night, O’Kelly took his men out on a sortie to capture an enemy raiding party. All told, in 18 hours his unit captured 284 prisoners and 21 machine-guns, a performance that earned him the VC, the third to be awarded in the Passchendaele fighting.
--
Military Medal (MM)

Terms
The medal is awarded to Warrant Officers, non-commissioned officers and men for individual or associated acts of bravery on the recommendation of a Commander-in-Chief in the field.

Bar
The silver, laurelled bar is awarded for a subsequent act or acts of bravery and devotion under fire.

King George VI:A crowned effigy, facing left, and one of the legends:

Reverse
The reverse shows FOR/BRAVERY/IN THE/FIELD in four lines, encircled by a laurel wreath and surmounted by the Royal Cypher and Imperial Crown.

Mounting
An ornate scroll suspender is attached to the medal with a single-toe claw.

Naming
The regimental or equivalent number, rank, initials, surname and unit of the recipient appear in plain block capitals around the edge of the medal. 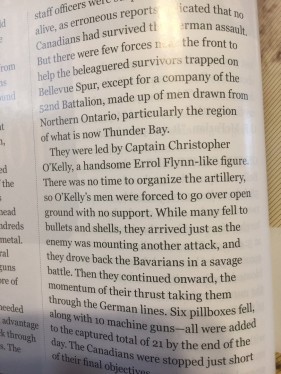 In the United Church, Echo Bay 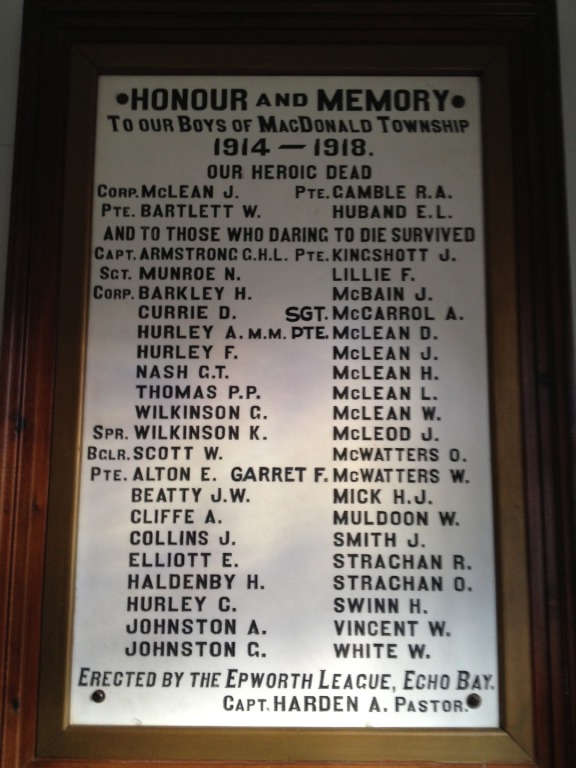 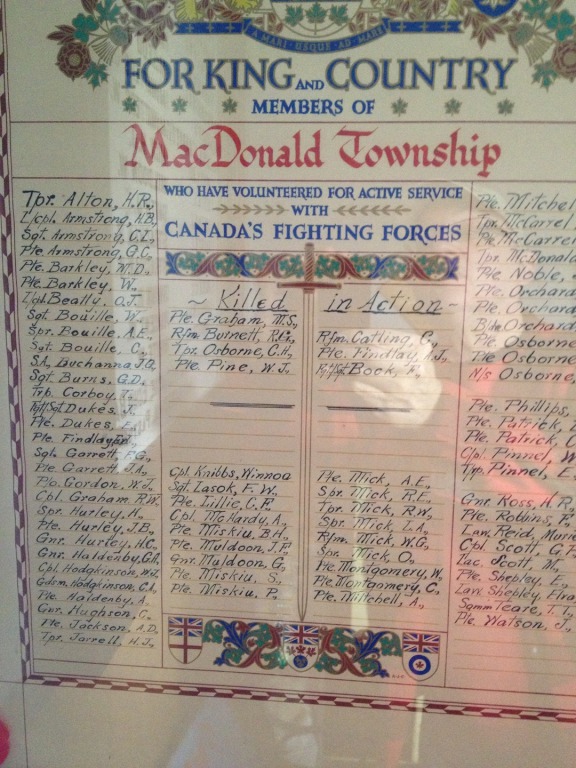