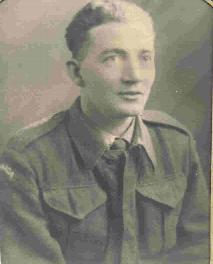 "On the extreme left of the area, third troop commanded by Lieut. "Red" Goff pushed over the beach and river to get into the "island" in order to neutralize the first objective, a well camouflaged concrete fort. This gun did deadly work, however, before 3rd troop could destroy it. With one shot it knocked out Cpl. H. A. Pockiluk's tank. The crew attempted to bail out but as they emerged from the tank they were machine-gunned. Thus the whole crew, Cpl. H. A. Pockiluk, L/Cpl. I. A. Lytle, Tprs. H. Osborne, R. F. Moore and W. F. Hackford died on the beaches a few minutes after H-Hour." 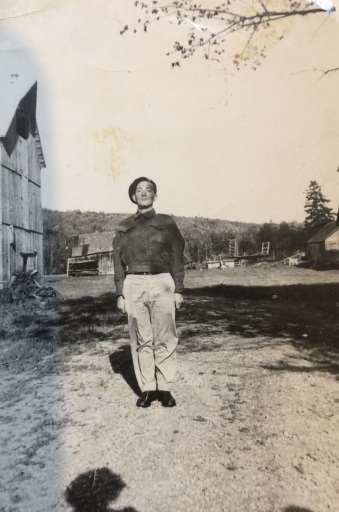 Harry Osborne, at Echo Bay, Pioneer Road at family homestead with barn showing in background. Family home deterioated and ultimately was burned for safety reasons in 2016. The barn remains standing. Shadow in foreground likely of family member taking the photo.

On Memorial Wall, Essar Centre, Sault Ste. Marie, ON; Book of Memories, Ottawa; picture his mother treasured, shown on beaches at Normandy; with his sister Ruth at Echo Bay train station; with his fiance Jean in England; nephew Art Osborne at his uncle's gravesite in Beny-Sur-Mer, France. 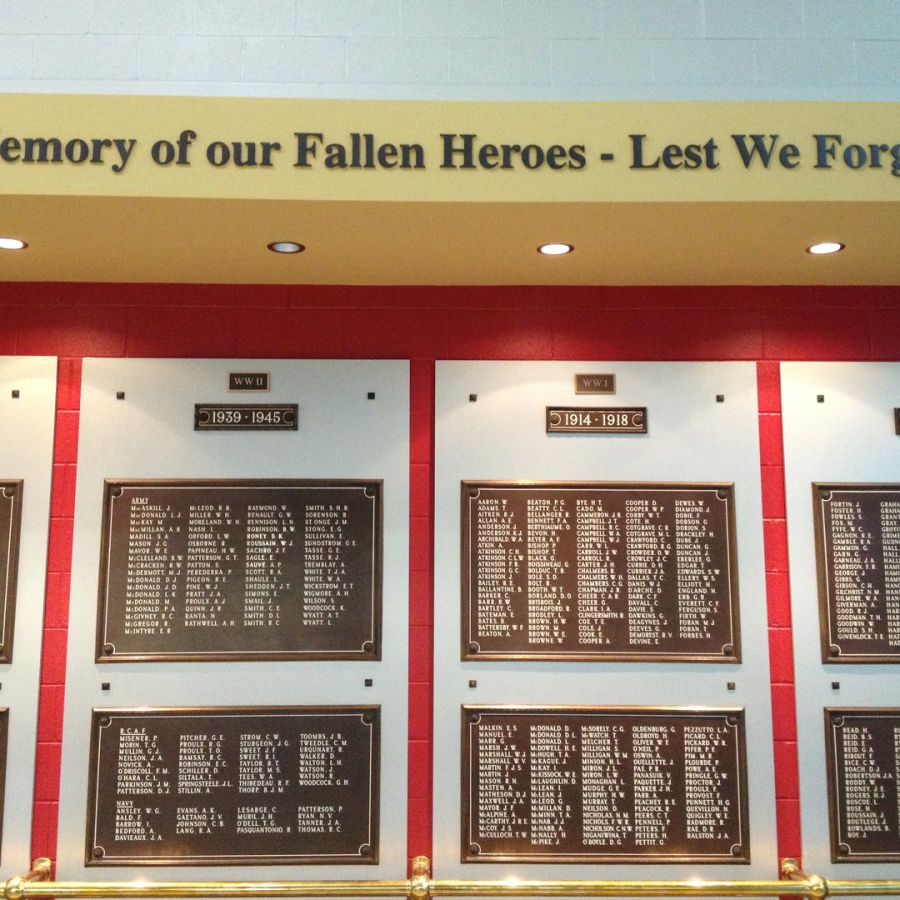 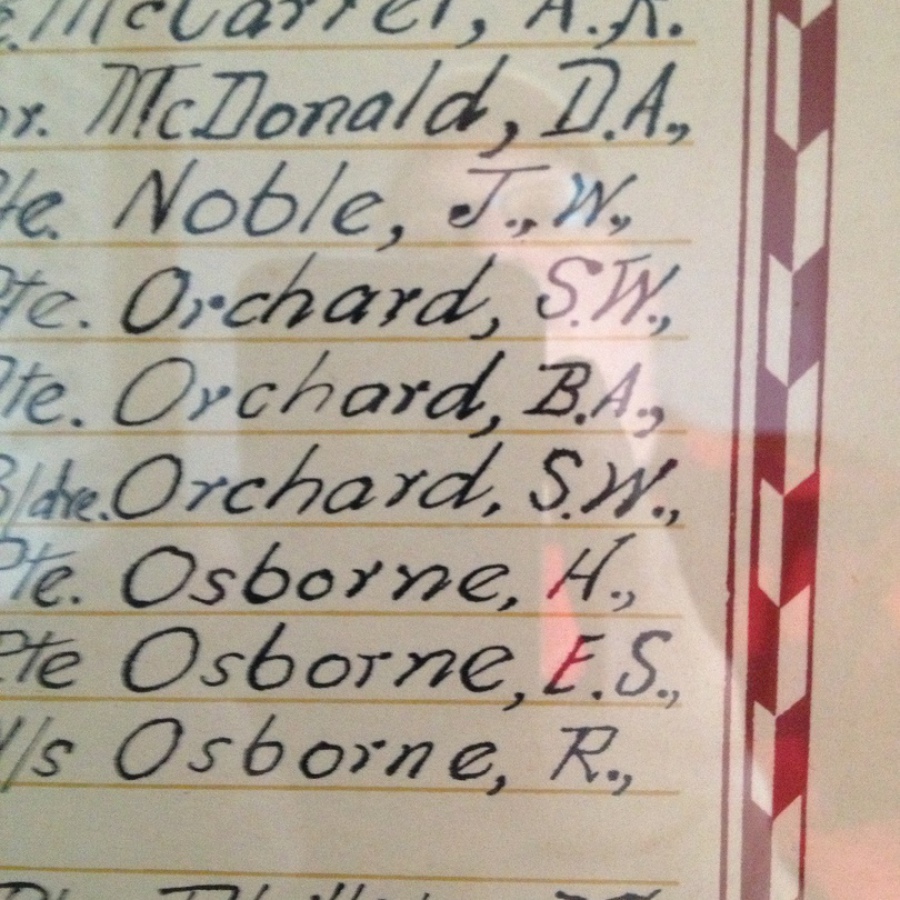 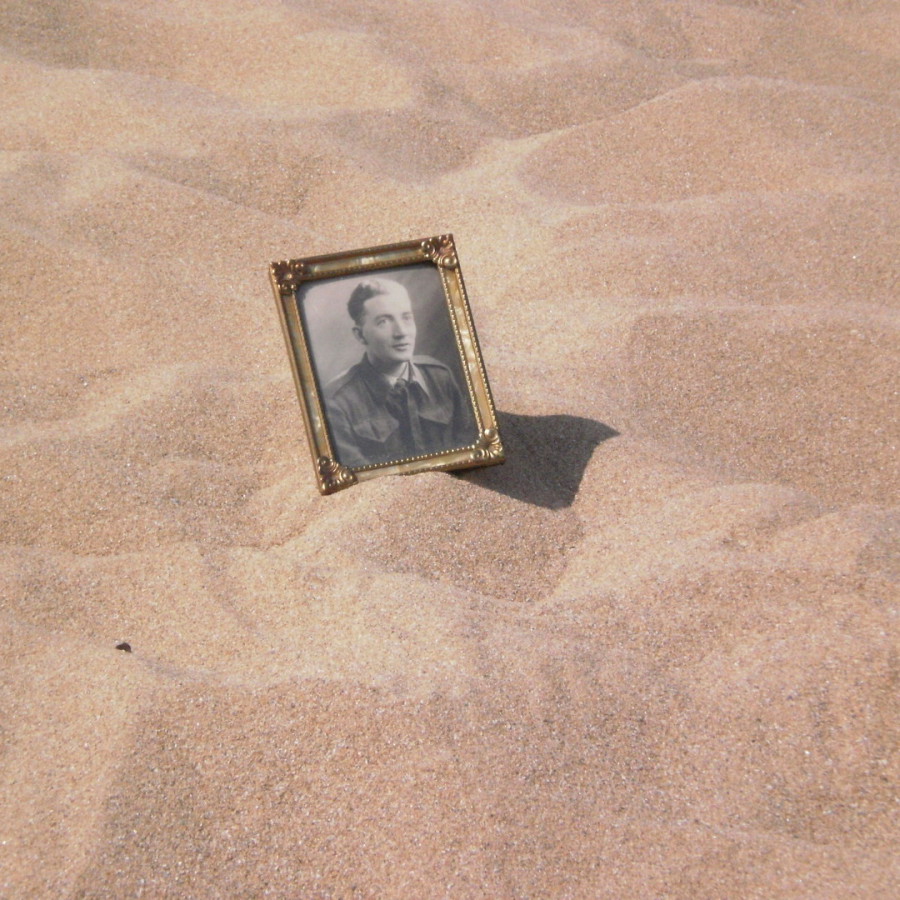 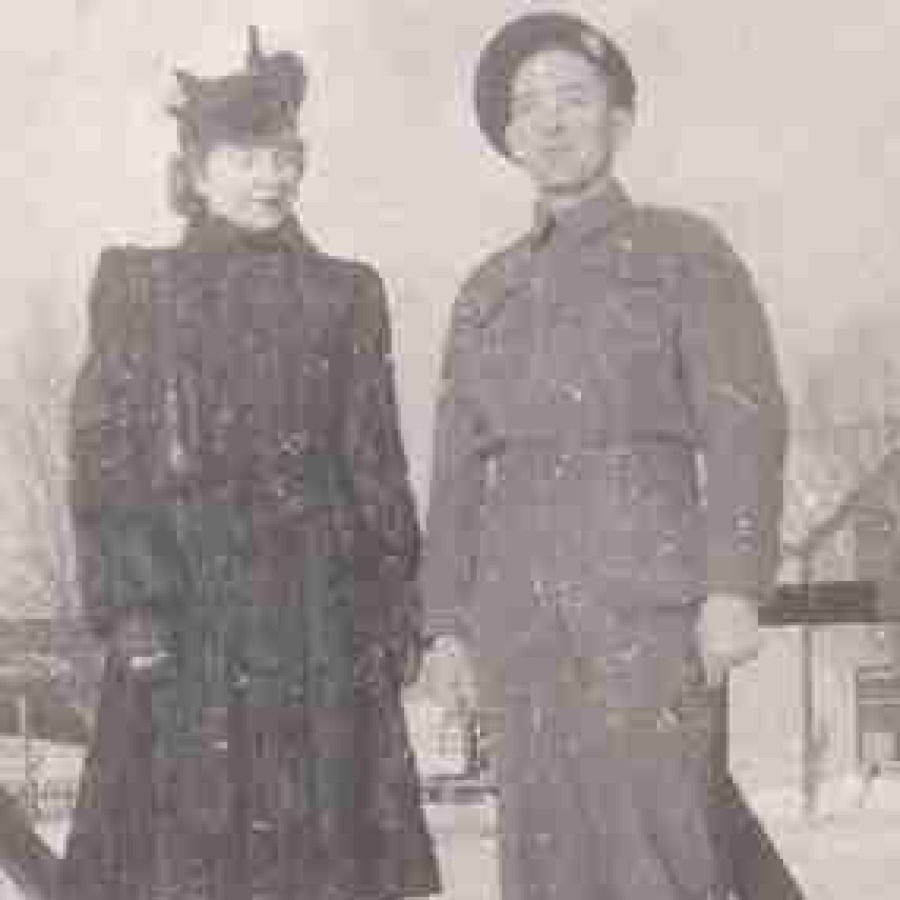 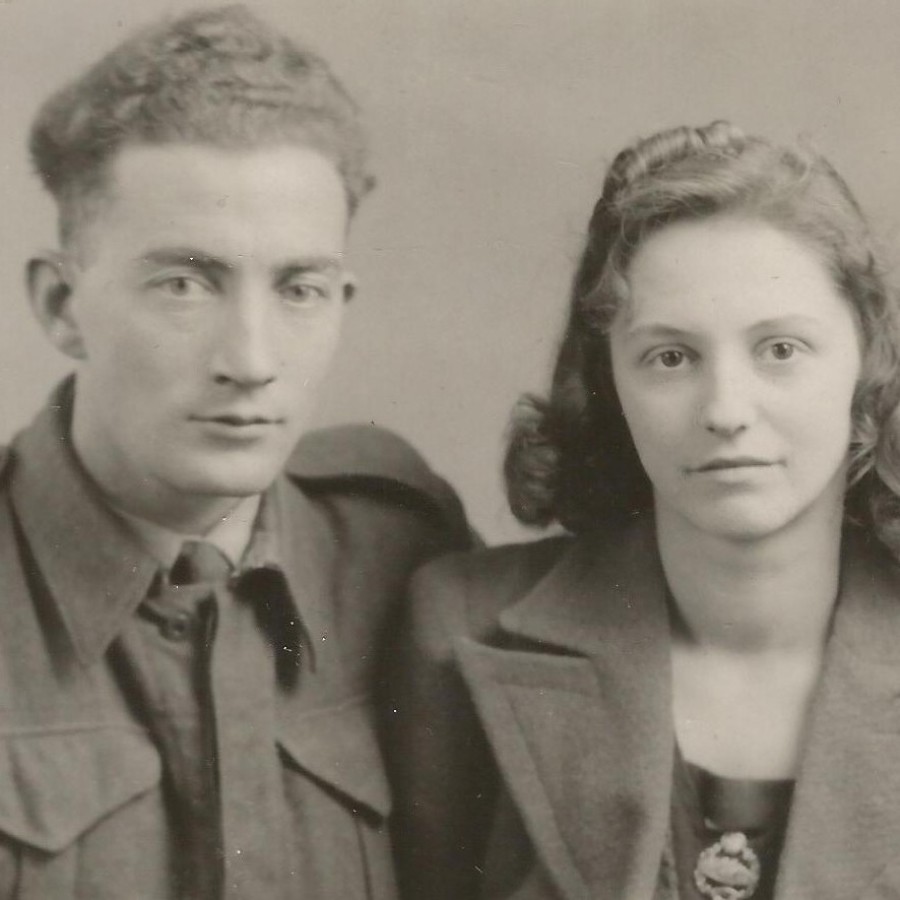 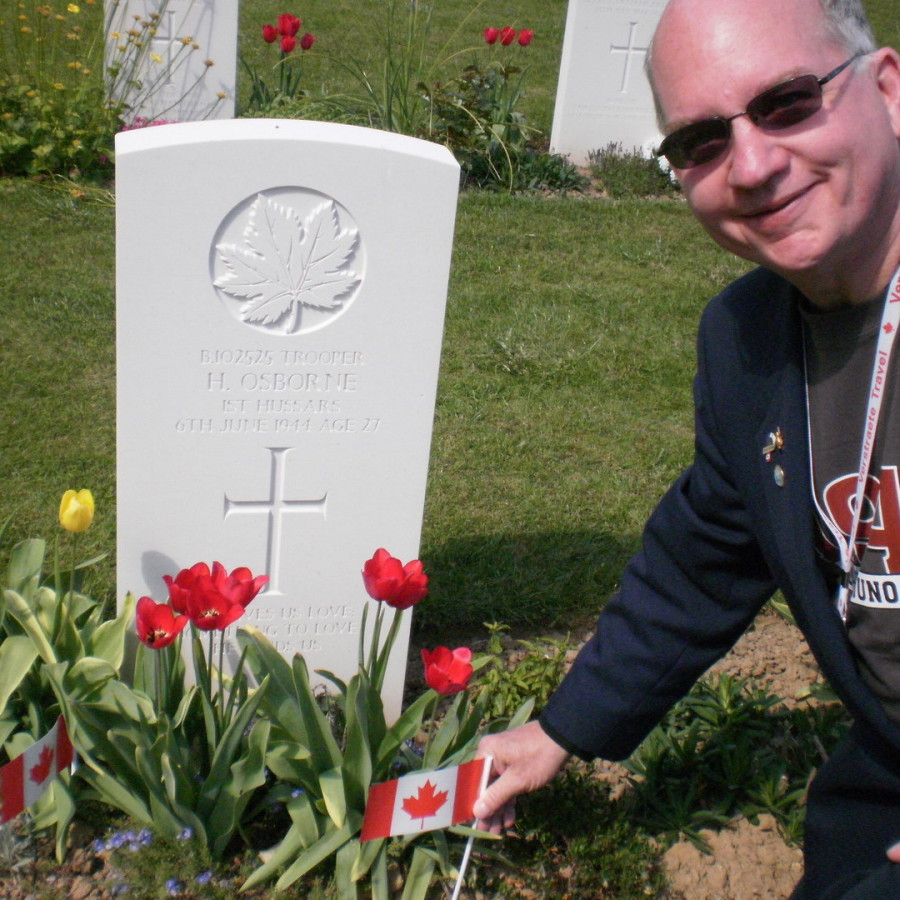 Place cursor over image for caption ....

Location:Beny-sur-Mer Canadian War Cemetery is about 1 kilometre east of the village of Reviers, on the Creully-Tailleville-Ouistreham road (D.35). Reviers is a village and commune in the Department of the Calvados. It is located 15 kilometres north-west of Caen and 18 kilometres east of Bayeux and 3.5 kilometres south of Courseulles, a village on the sea coast. The village of Beny-sur-Mer is some 2 kilometres south-east of the cemetery. The bus service between Caen and Arromanches (via Reviers and Ver-sur-Mer) passes the cemetery.
It was on the coast just to the north that the 3rd Canadian Division landed on 6th June 1944; on that day, 335 officers and men of that division were killed in action or died of wounds. In this cemetery are the graves of Canadians who gave their lives in the landings in Normandy and in the earlier stages of the subsequent campaign. Canadians who died during the final stages of the fighting in Normandy are buried in Bretteville-sur-Laize Canadian War Cemetery. There are a total of 2048 burials in Beny-sur-Mer Canadian War Cemetery. There is also one special memorial erected to a soldier of the Canadian Infantry Corps who is known to have been buried in this cemetery, but the exact site of whose grave could not be located.

Harry Osborne had two brother-in-laws who were also killed in World War II; Roy Thibedeau was married to Harry's sister Vera and Earl Bock was married to another sister, Florence.

a date with destiny

The cold and wet was unbearable. But the fear and being sea sick was even worse.

His thoughts went back to the farm in Echo Bay, Ontario. He wished he was there now with his parents, brothers and sisters.

Half a world away, on Pioneer Road on the outskirts of Echo Bay, his parents Henry and Mildred Osborne were sleeping. They had no idea when they went to bed what this day and specifically the next 30 minutes would mean to their lives and the lives of others.

The waves were rough. His thought of England where his journey began and where he left the love of his love, his bride to be. Her picture was safely tucked away in his tunic pocket. He put his hand on it and looked forward to taking her back to Echo Bay and starting their life together.

He looked around at those with him and recalled the good times they shared in England. He was close to each of them, but maybe particularly the one from Sault Ste. Marie, near Echo Bay. His name was Tom Hackford.

The thundering sounds of explosions started and although they knew it was coming, it still startled them.

Trooper Harry Osborne, four others in his tank crew and thousands of other Canadians are heading for their date with destiny. It’s D-Day, June 6, 1944 and the beaches of Normandy, France are ahead.

The tanks rumbled off the landing craft into the sea and were able to float because of a canvas shield designed to be like the sides of a boat. A propeller moved these Shermans forward through the surf, obstacles and mines.

This morning was much different from those days when they trained for this in England when they knew that they’d be back to base for supper. Now, living to the next minute seemed an accomplishment as bullets ricocheted off the tank and the German artillery shells landed everywhere around them.

Their looks at one another carried a, ‘this is it’ intensity. The explosions were getting louder as they got closer.

Finally, the tank gripped the round rocks in the shallow water as they switched from propeller to track drive. The sudden appearance of tanks coming out of the water stunned the Germans in their pill boxes as waves of men and equipment advanced from the sea.

This was Juno Beach, specifically Mike Red sector, just where Harry was supposed to be. They were on the far left flank and he saw the gun emplacement to the right that they had being trained to spot and take out. They got their turret moving toward it, throats dry and hands tightly gripping and squeezing the controls.

Then, a flash of light and smoke spewed from the pillbox. The beach defenders fired a shell at the tank taking aim on them. The noise, impact and shock as it hit the tank threw all of them around violently and immobilized their tank.

Suddenly, they now only had one choice. Leave the tank and clamber out onto a beach into a blizzard of machine gun bullets.

A tanker veteran will tell you when a shell hits your tank and you’re still alive, get out, because you know the next shell is coming soon and will finish you.

Harry and the others met destiny that moment and became among the first Canadians to make the ultimate sacrifice on D-Day.

A 1st Hussars history documents the final moments this way:

“On the extreme left of the area, third troop commanded by Lieut. "Red" Goff pushed over the beach and river to get into the "island" in order to neutralize the first objective, a well camouflaged concrete fort. This gun did deadly work, however, before 3rd troop could destroy it. With one shot it knocked out Cpl. H. A. Pockiluk's tank. The crew attempted to bail out but as they emerged from the tank they were machine-gunned. Thus the whole crew, Cpl. H. A. Pockiluk, L/Cpl. I. A. Lytle, Tprs. H. Osborne, R. F. Moore and W. F. Hackford died on the beaches a few minutes after H-Hour.”

To those Hussars who gave their lives on the beaches of Normandy these words from Lieut. Col. John Meldram, commanding officer of the Royal Winnipeg Rifles, whose Little Black Devils landed with "A" Sqn., First Hussars.

“To those who participated in the assault and survived the great day, these words will corroborate the certainty all ranks felt that the First Hussars had accomplished all that was possible and had lived up to their motto--"Hodie non Cras." (Today not Tomorrow)”

Harry Osborne was one of 20 1st Hussars killed along with 320 other brave Canadians. They gave up all of their tomorrows that day in June 1944.

They trained, served and died together, meeting their date with destiny. They remain together forever at Beny-Sur-Mer Canadian War Cemetery, France.