Earl Bock was a tail gunner on a Lancaster with 626 Squadron based out of RAF base at Wickenby http://www.626-squadron.co.uk/

His aircraft made it back to base following an October 23, 1944 during return from a successful mine laying mission. But, at about 20.21 hours on that return flight a night fighter attack was beaten off, according to Earl's Wing Commander report (shown below) but in the second attack, Earl was killed by cannon fire. His crewmates survived.

Flying with Earl that day were:

Here’s an excerpt taken from the losses database of the International Bomber Command Centre (IBCC): “Attacked by a night fighter on the return leg. The first attack was beaten off but cannon fire from the second killed the rear gunner instantly. The fighter was shaken off and the aircraft made a safe return to base with F/S Bock's body aboard.” With thanks to IBBC Dave Gilbert, Losses Archivist

Earl Bock was on Lancaster LN689 and that story is of particular significance to IBCC. Earl was one of around 300 servicemen who were killed on board aircraft that made a safe return to base, according to research by Dave Gilbert, Losses Archivist, IBCC.

He draws to attention the significance is, “that such losses are not documented in the usual losses publications, such as Bomber Command Losses by Bill Chorley as Bill and similar authors work from aircraft loss records and in this case the aircraft was not lost. On the other hand, I start with personnel loss records.” 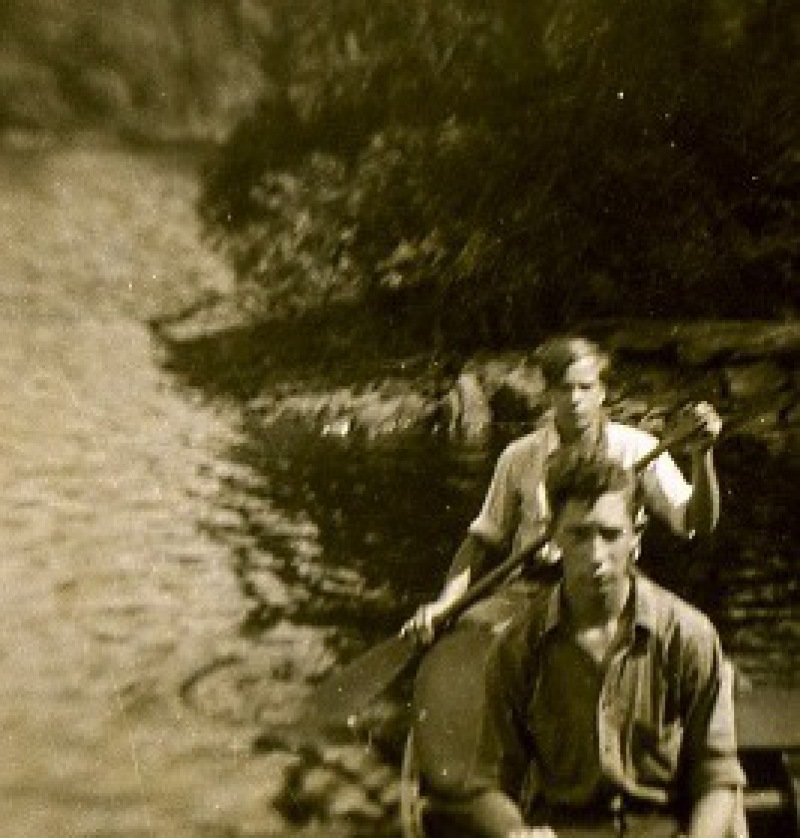 Born in Sault Ste Marie 1923
Parents were William Edward Bock and Mae Evelyn Pence
Earl was the first born in his family. He had 2 brothers, Lloyd and Philip and a sister Janice.
Earl was married to Florence Osborne on Jan 24, 1944 at St. Lukes Cathedral by W. Wright. Earl was 20 and Florence was 18 when they wed. Earl had previously joined the RCAF on November 11, 1942 in Toronto. He received his Fly Badge on January 13, 1944.
On January 31, 1944 Earl reported to Mont Jolie for training. He was shipped overseas from Halifax on March 26, 1944 arriving at Gourock UK on April 1, 1944.

When Earl joined up he was required to make a will. On 16 March 1943 his will made his Mother the sole beneficiary. However, it would seem that unknown to his mother, on March 1, 1944 Earl completed another will naming his wife Florence as the sole beneficiary. There are numerous letters in the file from “Mom” to the war department requesting Earl’s military service medals, pictures of his headstone, a copy of his will etc. The War Department patiently answered all these requests with notice that all information had been released or was only released to Earl’s wife Florence. It seemed this did not satisfy his mother as the letters became more and more intense and demanding. A London Life Insurance Policy in the amount of $1000.00 also named Florence as the beneficiary.

Before joining up Earl was a Jr. Chemist at Algoma Steel Corporation. He attended Sault Ste Marie Central School from 1930 – 1938 in Matric. From 1938-1941 he attended Sault Collegiate Institute in the commercial program then transferred to Sault Ste Marie Tech for the industry program. In 1937 Earl worked for Frank Wolloc as a clerk. He would have been in grade school at that time and he states his reason for leaving was for a better position. In 1941 he worked for Abitiby Power and Paper as a general labourer but got laid off in the same year. He started working for Algoma Steel in 1942 sometime (no date seemed to be provided) but he wanted to return to that position after the war. During his growing up Earl enjoyed football, skating and skiing as well as stamp collecting and he seemed to always want to fly!!

Location:Brookwood is 30 miles from London (M3 to Bagshot and then A322). The main entrance to Brookwood Military Cemetery is on the A324 from the village of Pirbright. Brookwood Military Cemetery is owned by the Commonwealth War Graves Commission and is the largest Commonwealth war cemetery in the United Kingdom, covering approximately 37 acres.
In 1917, an area of land in Brookwood Cemetery (originally The London Necropolis) was set aside for the burial of men and women of the forces of the Commonwealth and Americans, who had died, many of battle wounds, in the London district. This site was further extended to accommodate the Commonwealth casualties of the Second World War, and American, Belgian, Czech, Dutch, French and Polish plots containing the graves of Allied casualties. There are also German and Italian plots where prisoners of war lie buried