Caribou Island ownership is a bit of a mystery

A February 2018 CBC Radio news item about caribou being transferred to the island said it's  "owned by a private American conservancy foundation.”

A later news item masked the ownership of the island by referring it only as, ‘a private group’.

Wikipedia says, “The island was acquired completely by the Roy A. Ellis family in the 1960s and was transferred to the Melon Conservancy Trust in the early 1980s to never be developed.” An inquiry to the Melon Foundation has not brought a reply.

My earlier research had the Elizabeth Elliot Foundation of New York (a performing arts group) owning the island after it was donated to it by Roy Ellis. Communications to the Foundation and its Directors – some with Florida addresses - as well as the Foundation lawyers were not returned.

There’s another Caribou Island owned by the Nature Conservancy of Canada near Thunder Bay. Inquiries to that group about the Caribou Island near the US border in Lake Superior have received no reply. 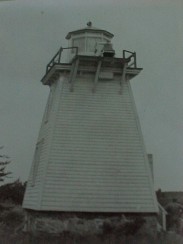 My grandfather Art and grandmother Mary and the children they had at various times with them, lived in the old wooden light tower building on Caribou Island (adjacent to the tower) which was there before the concrete tower built in 1911. The single residence built in 1956 remains to this day. When the original tower was demolished it was replaced with a duplex residence, which was taken down in 1990 after automation.

Concrete tower and light keeper's house as they are today.

With appreciation and thanks, upon request this information was provided by the Canadian Coast Guard:

Great Lakes Region: The CCG advises, “A.W. Hurley record shows he was first hired at Pointe aux Pins in Dec 1934 and transferred to Caribou in 1935 as a light keeper where he stayed until 1962.

“At Pointe Aux Pins his duties were to keep the light on and ring the bell during fog.”

This gives my grandfather 29 seasons of service and while it spans over four decades, the number of years is exceeded by at least 10 other light keepers, with the most service at 44 years and the next nine keepers all having between 30 and 39 years service.

The top Great Lakes service belongs to Benjamin Booth Baker, recorded at 44 years service at Clapperton light station and, according to this account, “ … drowned in the performance of his duty as lighthouse-keeper on Clapperton Island, Georgian Bay. His boat washed ashore, but the body was never found. After his death [his wife] resided with her daughter, where she died. A son is still in command of the lighthouse." (article is here and dated October 23, 2017)

For Atlantic region: In most families lighthouse sites were passed down from generation to generation and generally Lighthouse Keepers retired after 30 odd years.

Ralph Eldridge and Jim Yetman are the longest serving of which the Canadian Coast Guard (CCG) Atlantic region is aware.

Ralph Eldridge started in 1971 has now has 47 years of service and is still the Principal Light Keeper at Machias Seal Island, New Brunswick.

For Western region: The longest serving Lighthouse Keeper retired in January 2018 after 44 years however, he is still working for Canadian Coast Guard as a casual at Pulteney Point B.C. (the station from which he retired). 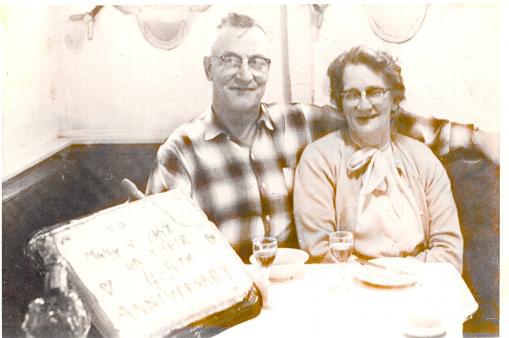 Art Osborne's grandparents, Art and Mary Hurley shown onboard a fishing tug that took them back and forth to Caribou Island; this is April 1961 with their 45th wedding anniversary cake.

As December approached in bygone eras, lighthouse keepers on the largest Great Lake readied for a trip home. The keepers of the Caribou Island light had, perhaps, more reason than most to long for the return to civilization. Those who staffed the station endured more isolation than others who plied a lonely trade.

Many lifetime residents have probably never heard of the 1,520-acre island in eastern Lake Superior. But for more than century, the lighthouse named after it has helped vessels find safe passage around dangerous nearby shoals. In some ways, the name is a misnomer. The Caribou Island lighthouse is actually situated on tiny, five-acre Lighthouse Island, about a mile away. The islands lie 100 miles northwest of Sault Ste. Marie. Michipicoten Island is 30 miles due north and the big lake’s nearest shoreline is 60 miles east.

The first Caribou Island light sat atop a wooden frame structure built in 1866. A 99-foot, hexagonal concrete tower with six flying buttresses replaced the original in 1911. The complex includes a house and a series of outbuildings for supplies and equipment.

Saultite Rauleigh Hurley spent many childhood summers at the lighthouse and later served as a helper for two seasons. “My father, Art Hurley, was the Caribou Island keeper from 1934 until 1963,” said 76-year-old Rauleigh, who lives on Royce Ave. with his wife Annie. “We went there every summer as kids. The first time was in 1934. My uncle Fred Hurley was my dad’s helper at the time. My mother Mary, my brothers Bruce and Wilbert, my sisters Leta and Norma, and I travelled from Michipicoten Island on the a fishing tug, the ‘James Purvis.’ It was really rough and we all got sick.”

To reach Michipicoten Island, the Hurleys had sailed on the “SS Caribou” from the Sault. “The boat was owned by the Owen Sound Shipping Company,” Rauleigh continued. “It had a regular mail route, and it leaked like hell.”

Childhood summers far from the mainland offered their own enjoyment for the Hurley children. “We used to beach comb,” Rauleigh recalled. “We’d row over to the big (Caribou) island. We’d find a lot of net floats and sell them to the fishermen for a nickel. The family also had a garden there.” When the youngster grew into a teenager, he found himself assisting with the lighthouse’s operation. “I was my dad’s helper in 1944 and 1945,” Rauleigh said. “There was a shortage of men because of the war.

Caribou had a lighthouse, foghorn, and beacon. It was also a meteorological station. The beacon was installed in 1944 and it was synchronized with the foghorn. It was driven by two 40-gallen barrels filled with compressed air.”

The station operated from April to mid-December without electricity. Kerosene lit the light. A clock-like system provided energy to make it revolve. “We used a hand-crank to lift weights to the top of the tower," Rauleigh said. “As the weights came down, they caused the light to turn. We had to rewind it ever six hours. Some of the light’s rotating parts sat in a mercury bath to prevent friction.” Equally important was preventing fires at the top of the tower during daylight hours. When the sun rose, the light was extinguished and heavy leather curtains were drawn. Even a single ray of sunshine passing through the lens could set the curtain on fire.

Rauleigh clearly remembers the vagaries and force of Lake Superior weather. “May and June were the worst for fog, but a storm could come anytime. Sometimes the spray from the waves would go right over the tower. A big storm in 1951 – September, I think – took out the dock. The had to build a wall to protect the island from deteriorating.”

The reefs that posed dangers for shipping also made for excellent fishing. Fortunately, the Caribou Island keeper and his facilities provided a refuge when needed. “One time my grandfather (Charles Hurley) was on the island,” Rauleigh recalled. “He could hear people screaming out in the fog. Their boat had broken down and they’d been out on the water for a week. My dad brought them in.”

After the war, Rauleigh Hurley experienced the lakes from a different perspective. Between 1946 until 1979, he worked on the boats as an oiler, fireman, and engineer. Despite his knowledge of Great Lakes weather, something else caused greater anxiety. “My only concern was fire,” he said. “There was no place to go. One summer we had four fires from bearings overheating. They’d seal the engine room and use carbon dioxide to put out the flames.”

Along the way, the sailor and his wife also owned and operated the Batchewana Supermarket for 15 years. Returning to his Caribou Lighthouse days, Rauleigh has mostly fond memories. “There really wasn’t that much work. It was very peaceful. You could watch the birds flying overhead as they migrated. But I was happy to get away at the season’s end.”

Caribou Island has never had permanent residents. But in 1944, the island was surveyed for a possible emergency landing strip. Trans-Canada Airlines considered the location as the carrier expanded service. But the runway never proceeded, and the remote island remains virtually unchanged since Alexander Henry visited in 1771.

Travelling aboard a boat built at Point-aux-Pins, the trader ventured north looking for gold. Henry has heard native tales about the “Island of the Yellow Sands” protected by giant snakes. Alas, while the sand was bright, the adventurer returned south with nothing to show for his efforts.

Today, no one leaves the Caribou Island lighthouse station in the late fall. The operation became fully automated in the mid-1970s and operates under the jurisdiction of the Canadian Coast Guard.

(of interest, the Estevan Point lighthouse shown on this CCGA website is similar in design to Caribou Island. Estevan was established in 1909 as one in a series of buttressed lighthouses designed by engineer William P. Anderson.) 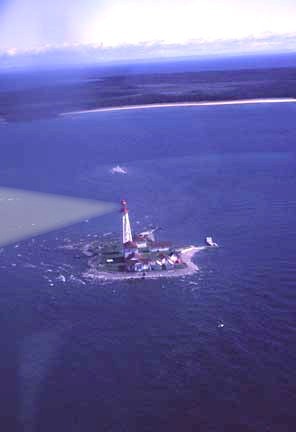 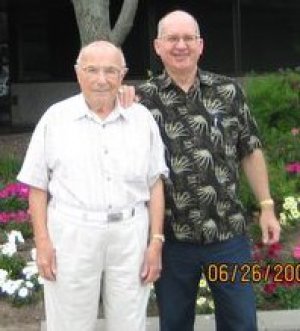 after the sinking of the Edmund Fitzgerald freighter ...

A visit to Caribou Island

Grand daughter of George Johnston, lightkeeper from 1912 to 1921 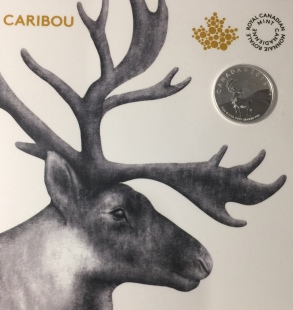